With the motto #Ourpartforthewhole, communication includes film for open TV, radio spot and parts that will be broadcast on online channels and in the company's social media profiles 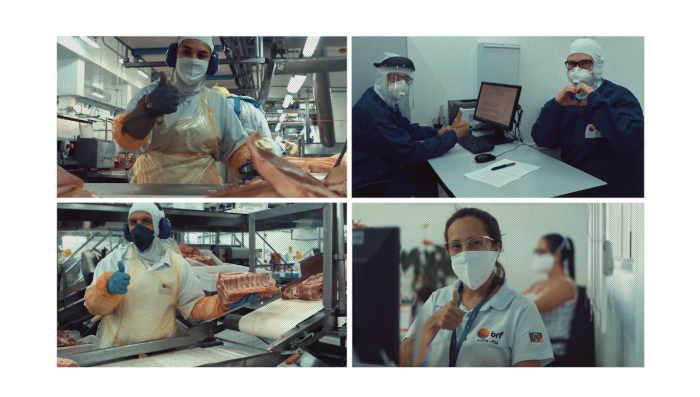 This week, BRF, one of the largest food companies in the world, owner of the brands Sadia, Perdigão and Qualy, is launching an institutional campaign that reinforces the company's commitment to the health and safety of its 90,000 employees, the production chain, and the supply of food to the entire population.

The 60 minute film, which will be shown from next Saturday, 27, on TV Globo, TV Record, SBT, BAND and TV Network during daily programming and in cities where BRF has operation, highlights the message that, at this delicate moment that demands attention and dedication, BRF is even more engaged, highlighting the importance of maintaining care and each person  doing their part.

“We know our responsibility to continue offering quality food to thousands of families around the world, especially at a time like this. Therefore, since the beginning of the pandemic we have taken all necessary measures to take care of our people. This campaign reinforces our commitment to our employees, communities and consumers,” says Raquel Ogando, Director of Communication and Corporate Reputation at BRF.

The campaign's film, advertisement, and OOH plays were created by the agency Ana Couto. The digital pieces, which include social and programmatic media, were produced by the agency Ampfy. The concept of the campaign was conceived in co-creation of both agencies with the signature #Ourpartforthewhole, highlights the initiatives adopted by the company, since the beginning of the pandemic in the country.

The same narrative will be used on the Company's digital and official channels, such as LinkedIn, Facebook and Instagram and will also feature 30’ and 15’ film versions, focusing on digital communication.

In April, BRF announced the donation of BRL 50 million in food, medical supplies and support for research and social development funds to combat Covid-19. Aimed at hospitals, social assistance organizations and health professionals in the states and municipalities where BRF operates, the actions are taking place in more than 10 states in Brazil, more than 70 municipalities, and also in the Middle East, in regions such as the United Arab Emirates, Kuwait, and Turkey.

The world's largest global poultry exporter, BRF has iconic brands such as Sadia, Perdigão and Qualy.  Its purpose is to offer quality food that is increasingly tasty and practical, to people all over the world, through the sustainable management of a living, long and complex chain, which provides a better life for everyone, from the countryside to the table Based on fundamental commitments to safety, quality and integrity, the Company bases its strategy on a long-term vision and aims to generate value for the communities in which it operates, its employees and members, shareholders and society.

BRF TRANSFORMS CUSTOMER SERVICE AND REDUCES NUMBER OF COMPLAINTS BY 23%